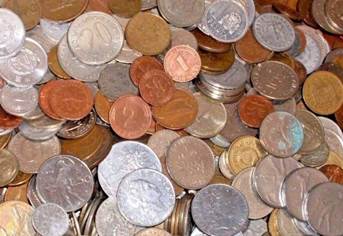 Our local Resene Colourshop (cnr Ridgway and Wilson Streets) has two cans on the shop counter to collect obsolete coins and currency in support of the Heads Up for Kids collection. This is a Lions Club initiative which has

"... collected over twenty tonnes of obsolete currency, that's the equivalent weight of 3 elephants, 30 cattle or 4000 cats!

The obsolete cash is then redeemed for New Zealand dollars and used to fund education programmes for young New Zealanders who would otherwise not get the opportunity ... Over 100 young people have already benefited from Heads Up for Kids, receiving scholarships to organisations such as Spirit of Adventure and Sir Edmund Hillary Outdoor Pursuits Centres.

To date Lions have collected over 20 tonnes of coins and thousands of banknotes bringing the total raised close to $500,000. The Reserve Bank of New Zealand estimates that there is $80 million in old decimal and pre-decimal NZ coins and $20 million in old banknotes unaccounted for."

When the cans are full Resene staff sort and courier the coins and currency to the Naenae Lions Club.

Have a Question, Tip, Something to Add?